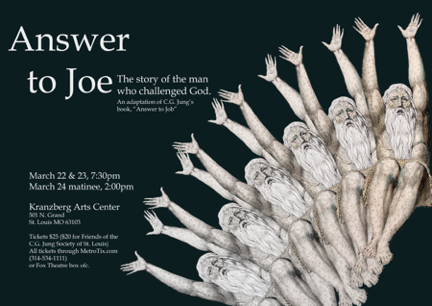 The C. G. Jung Society produced its second play, Answer to Joe in March, 2019.  The play is loosely based on Jung’s book Answer to Job, and deals with the same themes—the nature of God, the reality of the divine versus an individual’s image of it, and the psychological implications of an individual’s often unconscious god-image.  Though these are deeply serious topics, the play presented them in modern understandable dress and treated them with considerable humor.

Rick Vaughn, author of Answer to Joe, has long been interested in Jungian Psychology and its potential for resolving inner conflicts in ways that release creative energies.  In his proposal to the Jung Society Board for possible production of his original work, he said, “My intention was to communicate some of the profound, transformative insights that I discovered from reading Answer to Job.  In the process of writing, it became clear that the work was much more personal.  This story is my story.  It may well be a story for many others.  Job’s working out his relationship with the overwhelming and overpowering energies of Yahweh– which Jung equates with an individual’s coming to terms with the unconscious—has been my quest for decades.  My own god-image of a punitive, demanding, and intractable old patriarch needed considerable updating.  In writing the play, I knew I was somewhat describing my own inner conflicts and working them to a more satisfying end.  I seemed to be engaging the energies bound up in an old god-image and tempering some of them so they could be directed creatively.  I’m happy with the result, and in some strange way, I feel my ‘god’ is, too.”

And with the support of many others who worked tirelessly to produce Answer to Joe.

After each presentation, Rick and a local Jungian Analyst (Rose Holt on Friday and Saturday evenings and Sheldon Culver on Sunday afternoon), joined with the audience in lively discussions of the play and the issues it enjoined.

Answer to Joe was the second play the Jung Society has produced.  In February 2017, our first one Casting Shadows by Carol Haake was presented to sold-out audiences for three performances.  We were delighted with similar enthusiasm for Answer.

1 thought on “Answer to Joe Play Production by Rick Vaughn”

This site uses Akismet to reduce spam. Learn how your comment data is processed.